Strong Hearts to the Front A video invites people to join the struggle against the Dakota Access Pipeline. 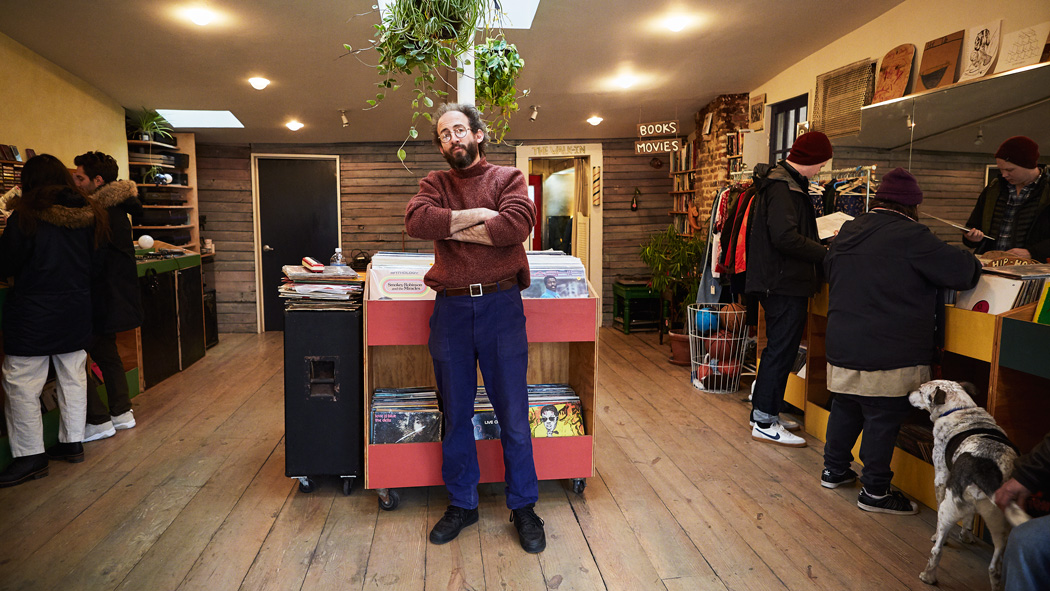 All photos by Theresa Hong

Bene Coopersmith’s record shop has neither sign nor online presence, yet DJs and music freaks travel far to flip through his stacks.

If you ever find yourself, on a lazy Sunday afternoon, riding the B-61 bus into Red Hook, Brooklyn, be advised that you will probably end up staying longer than intended. You might get off on Wolcott Street and wander past the weed-choked lots and warehouses – soaking up the oddly eddied, out-of-time feel of the neighborhood. You might walk out to the docks, or past a chain-link fence and sun-battered schoolyard, where local kids play basketball.

You will definitely hear music drifting from 360 Van Brunt Street, the quirky record shop that does not have a name. On any given day this music could be blues, gospel, or reggae; Ethiopian jazz or psychedelic rock. If you are the kind of person whose footsteps sway towards rhythm, you will end up going in.

The store is owned by Bene Coopersmith, a Red Hook legend in his own right. He is a collector, carpenter, musician, occasional actor, and a regular at Sunny’s, where he can sometimes be heard bopping on bass guitar with the band Nymph. 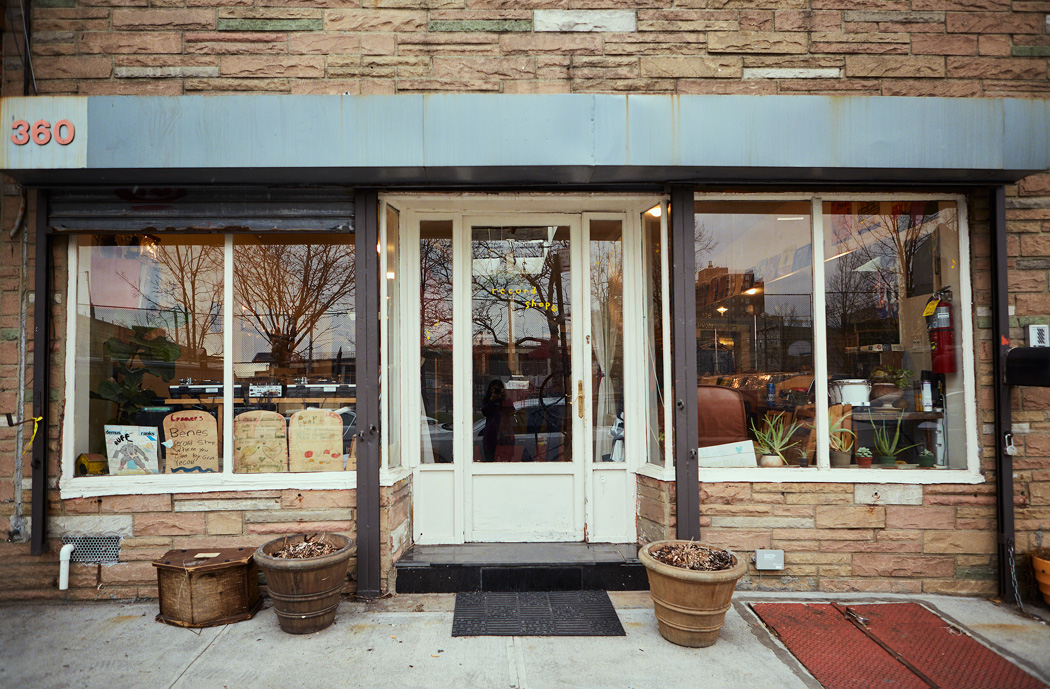 In person, Coopersmith is homey and oddly charming, with a vaguely Noo Yawk way of speaking. His knowledge of music is uncanny and extensive, and hours passed at his shop are filled with endless conversations about rare recordings, new discoveries and old favorites.

“You will never hear all the beautiful music,” Coopersmith explained to me the last time I visited his shop. “It’s like, when you’re an addict, you’re never bored. There is always more to find.”

Coopersmith opened the store in July 2015 to house the overflow of his personal vinyl collection. Crates of records were stacked so high in his apartment, it was hard to keep the dust off them. When a stack eventually fell over, he said, “enough!” and expanded into the storefront at Van Brunt Street. 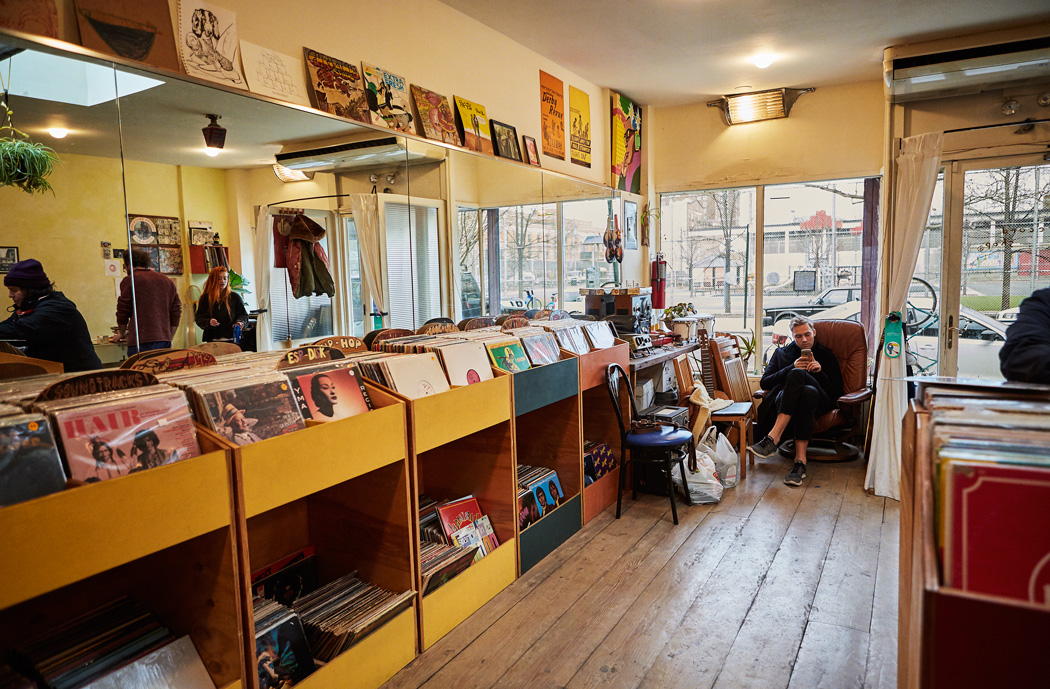 The space had previously housed a traveling Spanish-language library called Libreria Donceles; and before that, a popular French restaurant, a saxophone repair shop, and a studio for spinning classes (the full-wall mirror is still intact). It was also briefly the headquarters for Occupy Wall Street’s Red Hook volunteer base.

Since Coopersmith took over the space, it has come to feel like an extension of your favorite, weird cool uncle’s living room. Thanks to his background in renovations work he has been able to spend his days tinkering, fitting the store with a skylight and new wood floors.

It is the kind of space that’s easy to spend a lot of time in. You get lost browsing through the bins, admiring all the wacky and beautiful cover art.

It’s like, when you’re an addict, you’re never bored. There is always more to find.

Most of the records range in price from $1 to $10, but a few rare gems, like this Eric Dolphy jazz record, cost around $200. There is also a rotating selection of books (a quick glance reveals an eclectic assortment of titles, from Roland Barthes to poetry by Hafiz), cassette and VHS tapes (Bloodmatch, Total Recall, Breakfast at Tiffany’s, Clueless, Hook), and sound equipment like turntables and speakers.

The shop also features a small stage for performances, and there is a recording studio downstairs. There are plenty of comfortable chairs to sit in, with leafy plants in chipped terra cotta pots spilling out of every corner.

Finally, the back room is a full-service barbershop and hair salon. This might not seem like it makes sense – but actually, it makes more sense than most things in the world right now. The next time you need a custom blow-out, you should seriously think about calling stylist Chelsea Belle. 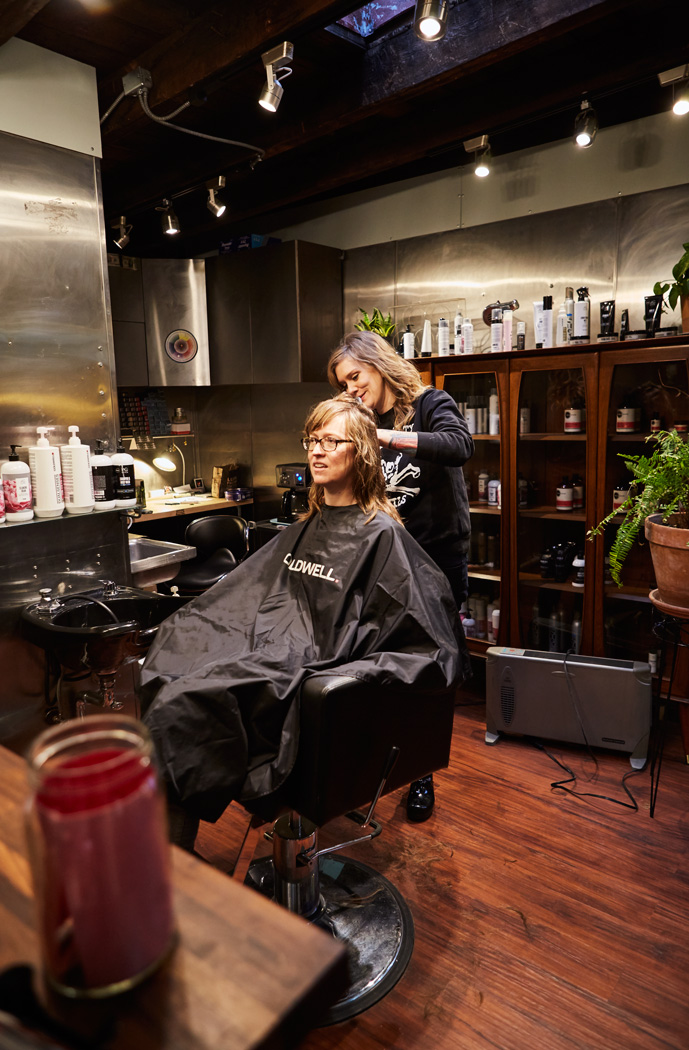 “The record store is a more intimate space than a standard salon,” Belle told me over the phone. “I get to interact with the clients so much more, and the music is so much better. You have more in-depth conversations.”

He is more likely to be found playing basketball in Red Hook than cruising the red carpet.

Belle, who is originally from California, has been cutting hair since 2002. She met Coopersmith through a mutual friend, a maker of classical guitars, who used to keep a workshop in Red Hook, too.

“Red Hook is an incredible community,” said Belle, who is currently finishing her PhD in Politics at the New School. “I like to call the salon a secret garden, and Red Hook itself is like a secret garden. People check in on each other. In a city as big as New York, where there is so much anonymity, and people are so busy, it’s nice to have that. It feels like a safe space.”

For Coopersmith, it is fitting that a hair salon operates out of his shop, because his mother was a hairdresser.

“When I was putting the salon in here, my mother said, ‘Lower the sink!’” he laughed. “She was right.”

Coopersmith grew up in Newtown, Connecticut, where his father was a doo-wop musician. He grew up around music, and he started collecting records as a teenager. When he moved to New York, he worked at Park Slope’s 5th Avenue Record & Tape Center before the shop was priced out of its location. 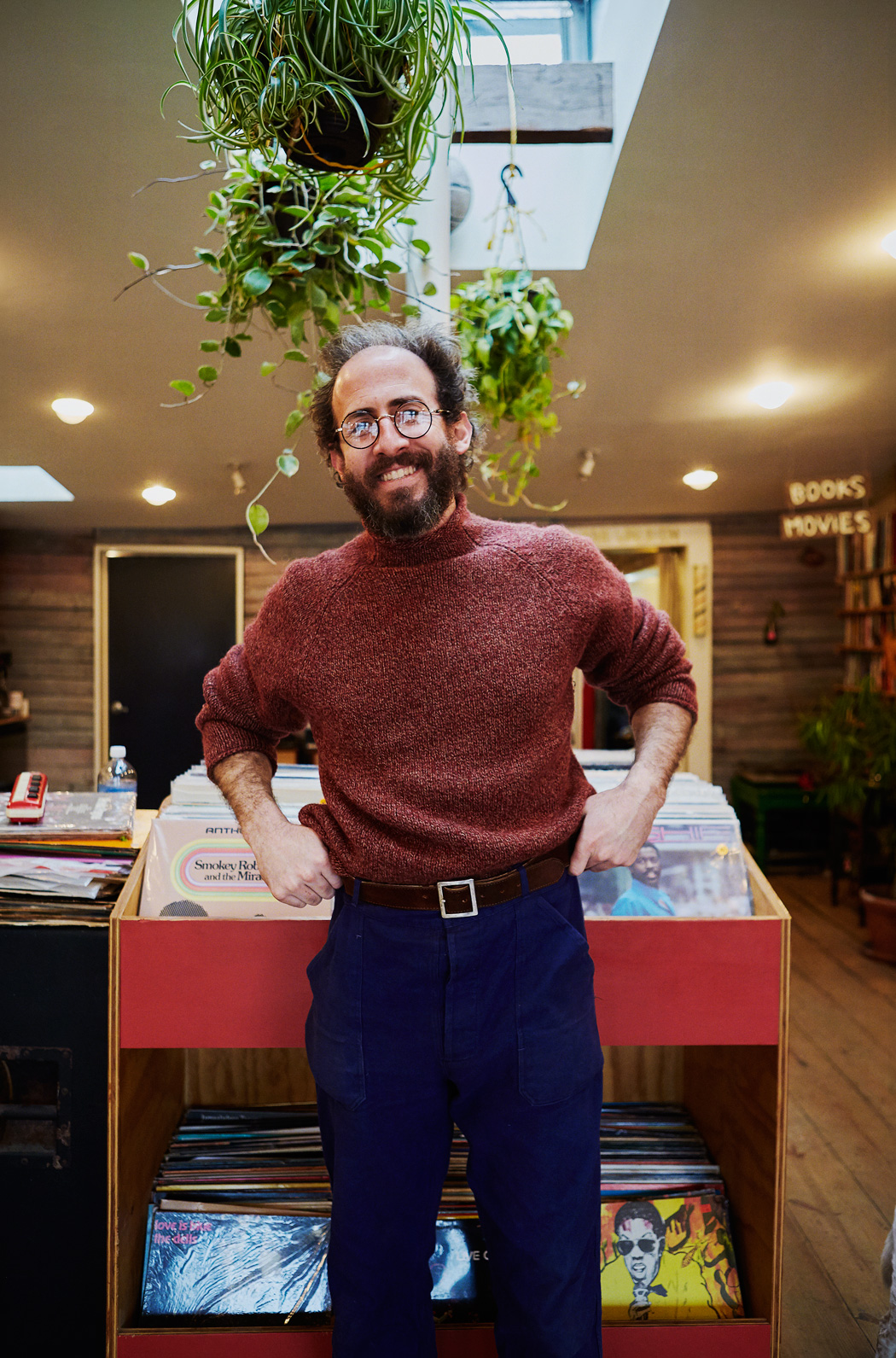 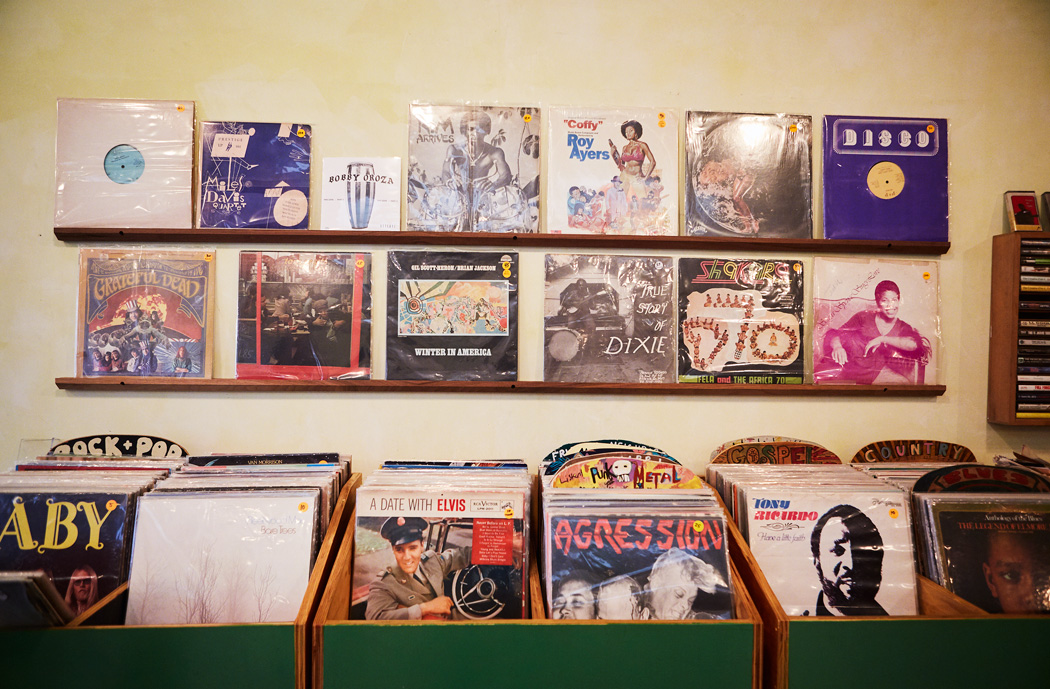 Perhaps the most remarkable thing about Coopersmith, though, is that he maintains very little web presence. His shop does not have a website, and he does not sell records online. Most of his collection comes to him organically, through friends and fellow collectors.

Either you’re obsessed with the object, or you want to tell the story.

The lack of marketing does not prevent music enthusiasts from seeking out his store. When Coopersmith used to work in renovations, for example, he saw the interiors of many people’s homes, and these people often think of him now when they want to buy or sell. He is also a fixture in the Red Hook music scene, which boasts a significant population of artists and DJs. These folks drop by like neighbors to browse and chat.

“It’s nice how it catches on,” Coopersmith told me. “I don’t even have a sign out front. No social media, except what other people do themselves. So it’s funny when real record guys come in – especially ones I look up to – that’s always surprising.” He paused to adjust his glasses. “A large professor in the shop is great. Omar S. in the shop is great. It’s nice when it’s incidental like that.”

You can tell by his style that Coopersmith is not easily taken in by hype – a fact that makes his tastes in music all the more compelling. Everything about him resonates with the philosophy that vinyl-collecting is not an elite or exclusive culture. He is proud to offer a large selection of one-dollar records so that residents of the less gentrified parts of Red Hook can come in, too. And he has collaborated in the past with the Red Hook Initiative, inviting neighborhood kids to make videos inside his store.

“That’s the beautiful thing about music,” he explained. “It’s in the air. There’s no boundaries involved in music.” 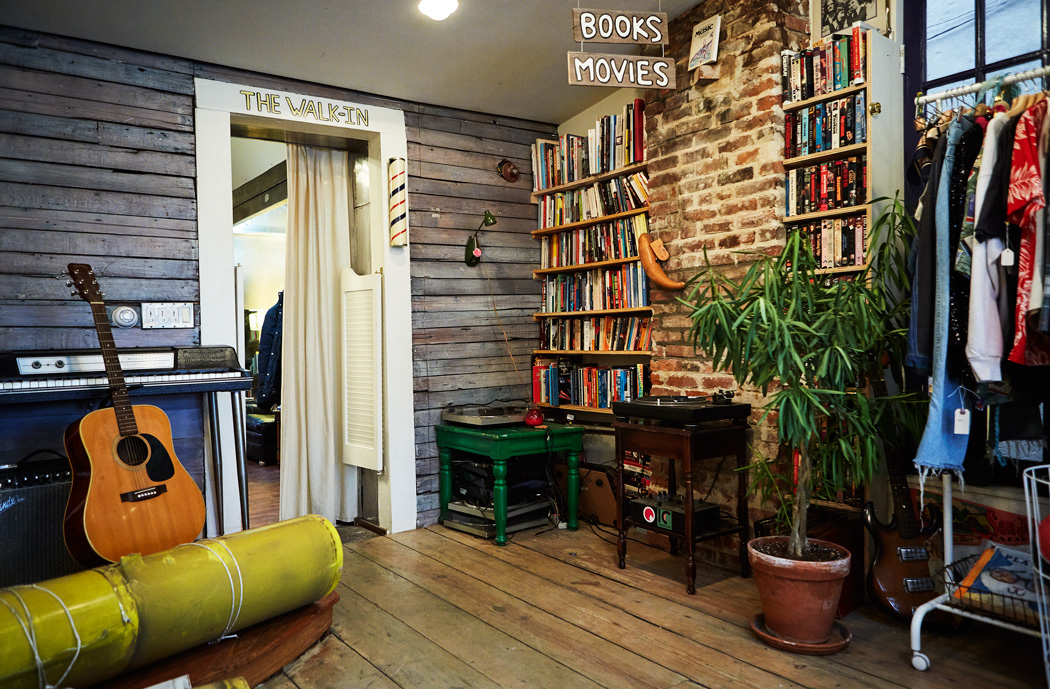 When I pressed him further on the notion that collecting is an elite hobby, he considered thoughtfully before replying: “Either you’re obsessed with the object, or you want to tell the story,” he said.

“I’ve sold really fancy records for a lot of money just because people want the object. But I prefer the DJs that want to tell the story – not just be like, ‘look how rare this is’ – but really love the music coming out.”

Another delightfully surprising fact about Coopersmith is that he recently starred in Dustin Guy Defa’s new film, Person to Person – alongside Michael Cera, Tavi Gevinson and Abbi Jacobson – which premiered at Sundance in January. The central character of the film is inspired by Coopersmith himself: his larger-than-life, magical persona, although he would never tell you anything about the film if you did not ask.

While at Sundance, Coopersmith spent time at the Women’s March to protest Donald Trump – as well as to take a break from the film festival atmosphere, which he admitted was a little too glittering of a scene for his personal comfort. He is more likely to be found playing basketball in Red Hook than cruising the red carpet.

“I went because my buddy made the film, so I went to cheerlead him,” he said.

The record store also has space to accommodate music lessons.

The hours are 12pm to 8pm, Wednesday to Sunday. 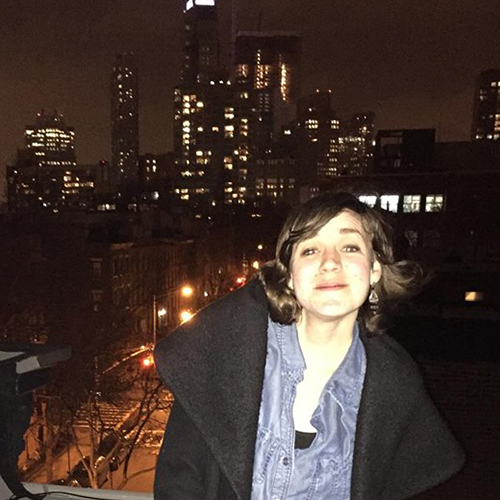 Rachel Veroff is a writer from New Mexico now living in New York. Her work has appeared in Guernica, The Huffington Post and Vol. 1 Brooklyn. She is working on a novel