A comic about this year’s Idapalooza: A first-timer’s reflections on the good, the hard, and the in-between. 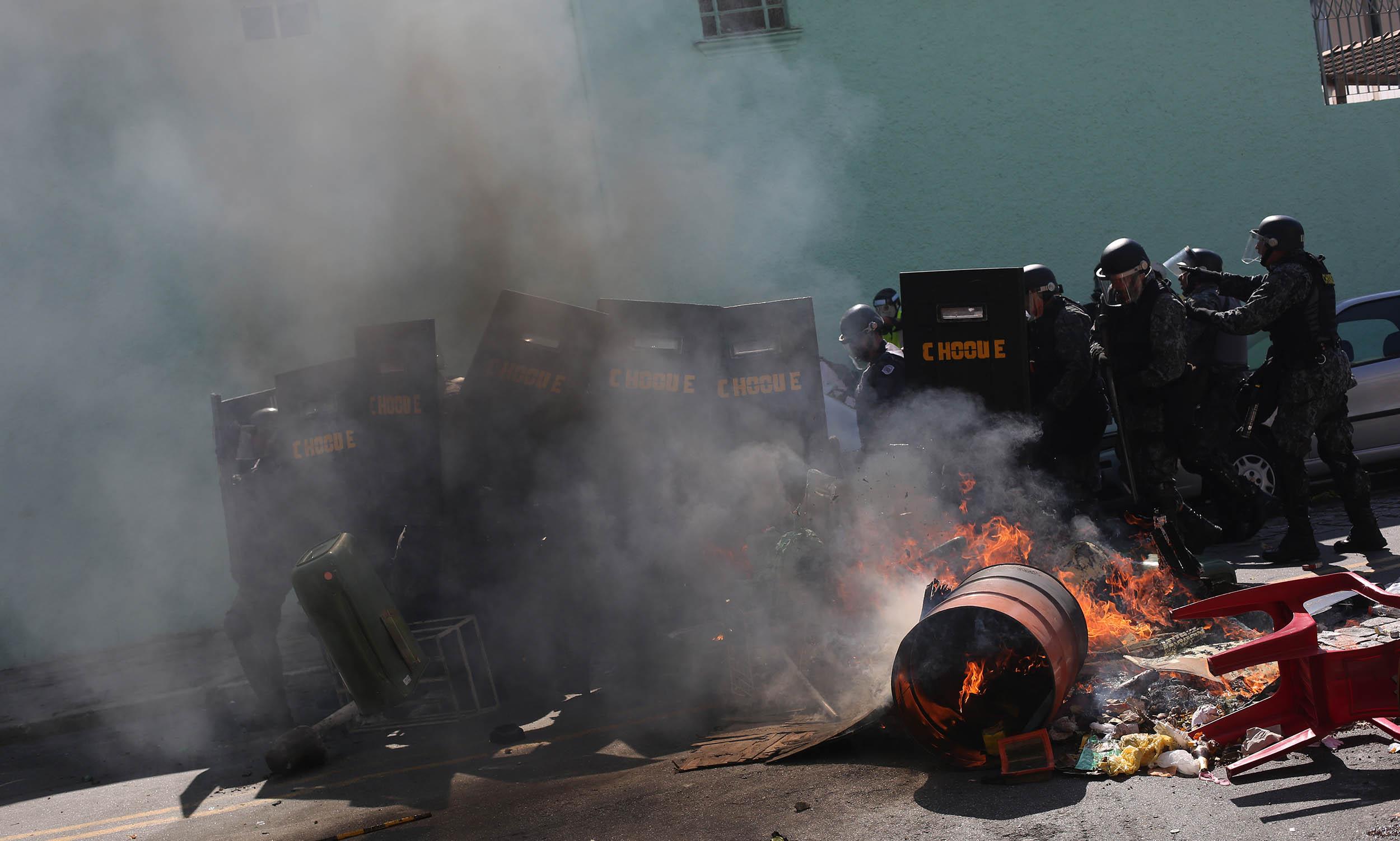 The World Cup Mega-Disaster Is On

The World Cup started today, and with it the culmination of a much longer power battle between Brazilians who vehemently detest the World Cup and the authorities who defend it.

Hours before the opening game of the World Cup, Brazilians took to the streets once again to protest and disrupt the games — the most expensive World Cup in history, which cost Brazil over $11 billion. In São Paulo, Rio de Janeiro, and Belo Horizonte, protesters clashed with police while blocking a highway, trying to enter a stadium, protesting public spending, and rioting.

These are bizarre days in Brazil. The country has been on fire for a year, protesting not only the World Cup but public spending, the government, repression, corruption, and inequality as well. The World Cup may continue uninterrupted, but the soccer-loving population of Brazil have good reason to object. Like my friend Nico said the other day, “Brazilians have soccer in their blood. When they’re protesting the World Cup, you know things are really bad.” 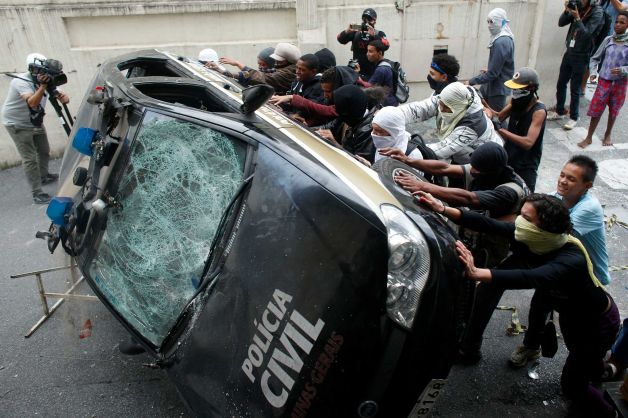 This year of revolt started last summer, on June 6 in São Paulo, after the announcement of yet another increase in the transit fare. First, thousands of people showed up to the protest, then tens of thousands, eventually drawing 100,000 protesters in Rio de Janeiro, making it the largest street demonstration in Brazil in 20 years. The demonstrations spread to other parts of the country, and at the end of June there were days with protests in over 100 cities simultaneously, some of the larger cities witnessing protests every day of the week. The biggest protest in Brazil’s history occurred in Rio de Janeiro, with 3 million people in the streets at the end of the Confederations Cup.

While the protests started out as a reaction against the transit fare increases, they evolved into a much wider rejection of the government, public spending, and the military police in general. As it became evident that the majority stood on the side of the protesters (rather than the police) the media flipped from critiquing the riots to trying to understand them. For example, watch this video of a TV pollster being shocked by the vast public support of the riots, specifically vandalism.

Although this year of protests has been formulated as a rejection of the World Cup, the cup should be seen as the droplet that caused the beaker of flagrant inequality between rich and poor to overflow. A common thread in all the protests was the outrage at the misuse of public funds. Altogether, Brazil will spend around 30 billion dollars on the 2014 World Cup and the 2016 Summer Olympics, making the upcoming World Cup the most expensive in history. Meanwhile, FIFA will be 4 billion dollars richer by the end of the summer.

The effects of the World Cup started becoming evident years ago: evictions and home demolitions, the “pacification” of favelas, the construction of highways, stadiums, and luxury hotels. The city centers have witnessed an ethnic and social cleansing, with investors buying whole city blocks, tearing down historically protected buildings and building luxury hotels. Real estate prices have skyrocket and poor residents have been displaced from the city center. While president Dilma Rousseff’s government defends these investments, saying that they ‘put Brazil on the map’ and ‘serve and incentivize future growth,’ most people see this as a big waste of money and as further evidence of the corruption of a government whose interests concern the wealthy and international actors at the expense of everyone else.

Between 170 and 250 thousand people have been displaced from their homes without any right to compensation, in addition to the many thousands who have been displaced due to real estate price hikes. Ten people died during the construction of stadiums. While investments in public transportation were canceled, two billion dollars were allocated to the state police for World Cup-related policing efforts. It’s no surprise Brazilians are asking: “Copa pra Quem?” — “Whose Cup?”

Diego: The last year has been very unusual. Things are constantly changing. Social movements have really taken hold and more people than ever are questioning what is going on, and understanding what a big problem the World Cup is to this country. 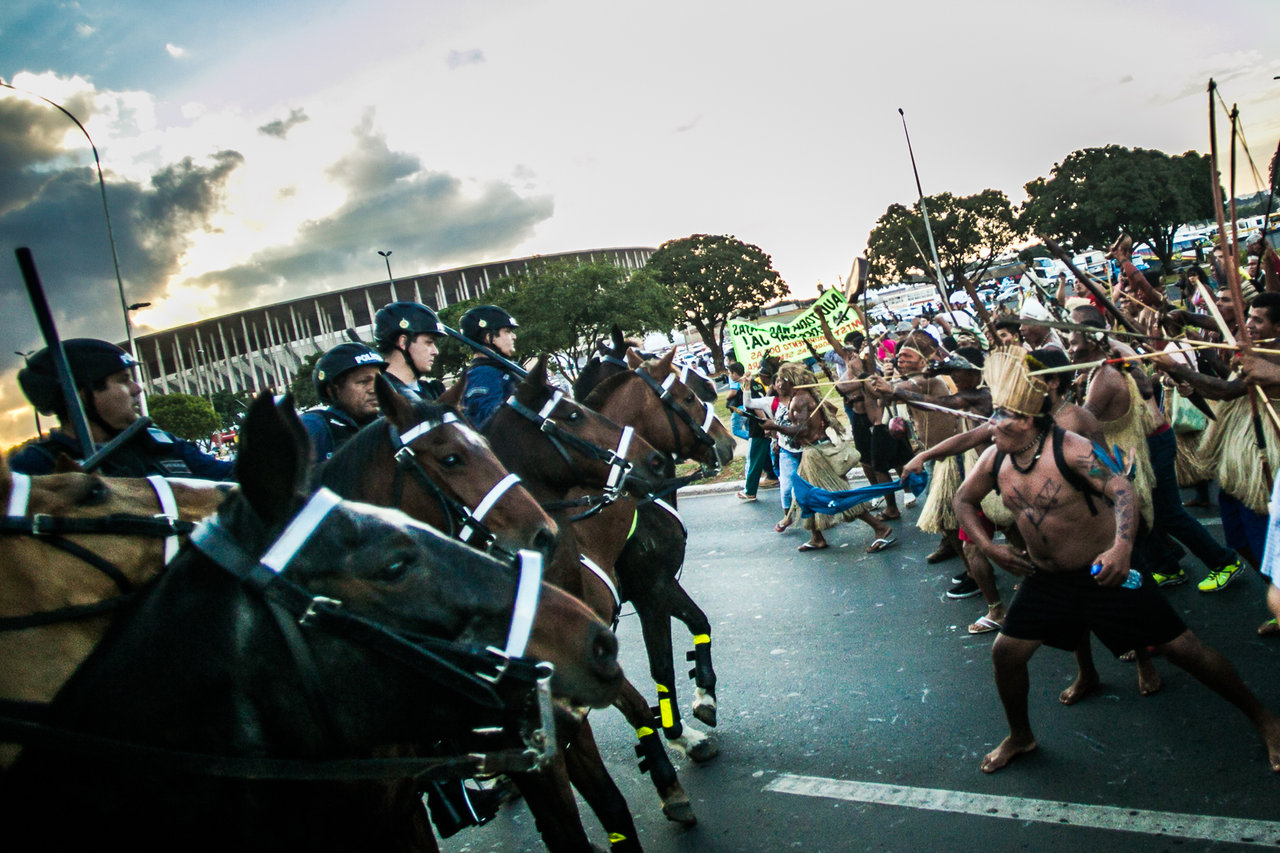 On May 27 in Brasília, 3000 protesters, including 300 indigenous people, clashed with police while protesting against FIFA, the government, World Cup sponsors and the advance of agribusiness.

Throughout the year, the police have been experimenting with new tactics for the kettling and control of mass mobilizations — sound cannons, water cannons, chemical agents, tasers, and rubber bullets. In Belo Horizonte, people fought pending legislation which involved sentences of up to 30 years for participating in illegal protests. Other proposed legislation would place illegal protests in the realm of “terrorism,” and enable the State to declare a “state of exception” during protests.

Normally, this kind of repression is confined to the favelas, away from the gaze of international media. It is easier for the State to justify excessive violence and war against a portion of the population when that population is already marginalized and fairly small. But when the dissenting minority becomes a majority, that justification no longer holds; instead, it becomes apparent that the forces of authority are protecting the powerful elite. The ones paying the price for this extravaganza don’t want it, but between them and the World Cup stand hundreds of thousands of soldiers, police, and robo-cops trained to kill. This is the Hunger Games IRL.

Ultimately, this is the hyper-violent push of a country into advanced capitalism. Displacement, dispossession, gentrification, murder, exploitation, and revolt are aspects of every country’s transmogrification into advanced capitalism; in some places around the world that development occurs slower, which makes if possible to conceal systemic violence under the guise of the “rehabilitation of individuals” (imprisonment, social benefits, legal processes, and so on). But in the end, the result is the same: obey or pay the price. But,

Diego: Nobody expected this to happen, and nobody knows what will happen next. Both the government and the population have been very fickle — things shift very quickly.

Even if the protests are being criminalized, this will not stop people from protesting. There isn’t a single group who is organizing, there are many different movements and it’s impossible to stop all of them. Nobody knows what will happen during the World Cup. We are all exited.

Unfortunately, we must end on a morbid note, and leave you with this terrifying video of police brutality in Brazil: